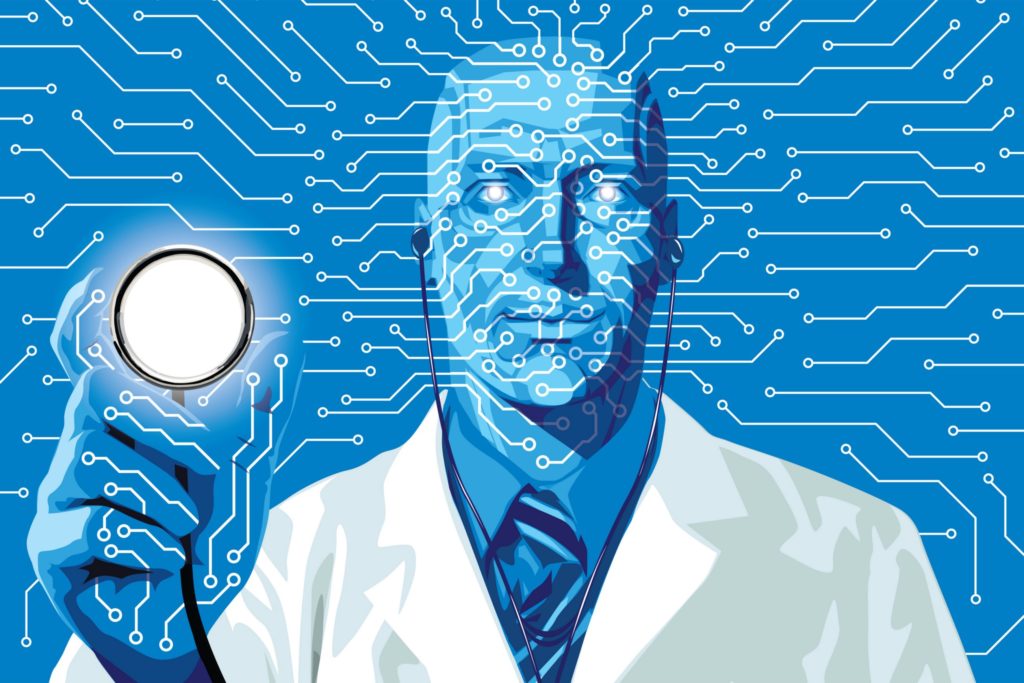 What is Artificial intelligence ?

Artificial Intelligence AI is the combination of algorithms proposed with the purpose of creating machines that have the same capabilities as humans. A technology that is still distant and mysterious to us, but that for a few years has been present in our daily lives at all hours.

Throughout our visions of the future and various classic science-fiction media, we often find particular attention to detail paid towards health and medicine, and with that ideals for well-being enabled by cutting-edge and all-encompassing technology.

Be it Luke Skywalker’s Bacta Tank session, Starfleet’s medical tricorder, or Discovery One’s habitation ring system. Whilst these certainly appear to give their worlds some flair, the healing times of various practices are usually only as short as the scene’s plot conversation. Nevertheless, all explicitly sci-fi settings will eventually make a passing note on high-end healthcare or, most especially, unprecedented lifespans.

Of course, it’s no coincidence any vision of the future entails greatly developed healthcare. Even when looking to the past, through squabbles on the good old days or on what has genuinely improved today, it is unanimously agreed upon that we should appreciate our modern standards of medicine. Indeed, the wheel of progress is essentially synonymous with continuously improving preventive medicine. But, recent breakthroughs have accelerated innovation within the health industry, as the image for our health’s future starts to take shape.

One of the most important advances in recent times has been the application of AI-based techniques to healthcare. Artificial Intelligence is the use of coded software routines to perform tasks usually associated with human cognitive functions, such as processing language, recognizing sounds, and general pattern-learning for problem-solving functions.

The field has veritably sent shockwaves across the field, but don’t expect to start seeing an Emergency Medical Hologram any time soon, researchers are doubtful we’ll soon see AI doctors completely replace human physicians. However, the gains have already proved substantial as powerful AI techniques can help unlock vital information hidden throughout the huge swathes of data being exchanged across cyberspace and the medical sectors.

In addition, it can help reduce diagnostic errors which are all too inevitable in human clinical practice. The second category involves natural language processing methods, which can extract key information from unstructured data such as medical publications or clinical notes, in order to update the vast repertoire of medical literature and knowledge a practitioner requires, at an unprecedented speed and efficiency. Though these methods are not perfect at the get-go, as algorithms need to be reliably trained through past clinical activity data before being immediately deployed for health applications.

Although research into AI for medicine has been substantial, it is most commonly allocated around a handful of diseases: nervous system diseases, cardiovascular disease, and cancer. Examples include the use of IBM Watson as a reliable AI system in the diagnosis of cancer; the detection and analysis of the timings of spinal motor neuron discharges in order to control prosthetics; or analysis of high-resolution MRI images in the diagnosis of cardiovascular disease.

That is not to imply that key developments are not to be found elsewhere. A particular problem in health is the reliable prediction of stroke outcomes, a concern exacerbated by the huge range of possible scenarios.

One project found that predictions made from physiological parameters 48 hours after the stroke were over twice as accurate with the AI-based method than over the standard regression analysis model – an increase from a 43% accuracy rate to 97.5%.

AI-based research has been accelerated in recent times thanks to the emergence of deep-learning models, which can be simply understood as neural networks with a multitude of layers enabled through greater computational power. One high profile case involved a deep-learning algorithm which performed on par with 21 board-certified dermatologists when performing skin cancer classification, after being trained through 130,000 clinical images of skin lesions.

This development has been particularly important in handling the ever-increasing quality and quantity of data.

The continued development of AI-based methods has helped nurture other emergent fields. One such example is the nascent field of Digital Epidemiology. The goal of epidemiology is, at its core, to understand the health dynamics in populations and patterns of these diseases in order to help understand their causes and subsequently consolidate preventive medicine and promote health.

Digital epidemiology, on the other hand, involves far more than merely being epidemiology based on digital data, but more so concerns the collection of epidemiological data outside the clinical sector, thus data not originally generated for epidemiological purposes. One such example is Google Flu Trends, a webservice which made flu predictions based on aggregate search query results.

Alternatively, public social media platforms such as Twitter are invaluable sources of data which can be used for epidemiological purposes. The widespread adoption of mobile technologies including phones, smartwatches and fitbit has been primary in the generation of such data. Due to the sheer mass of information being exchanged through such channels, it is no surprise that Machine Learning was vital to supporting the field. But one key concern relates to the question of data access and privacy.

The deep learning approach is highly dependent on very large datasets from which the DL algorithms can learn from. The issue is made more pronounced by the sensitive nature of healthcare, thus requiring AI to be trained to high standards as it deals with human health.

Consequently, this has caused a large demand for open access to large amounts of data to health professionals for the sake of public interest. Whilst AI has great promises for the future of health, at the same time this collection, storage and use of vasts amounts of data poses various ethical concerns regarding safety, privacy, ownerships and regulations, especially in regards to what data was used for certain algorithms or the criteria through which those algorithms were built on in the first place. Given the recency of the matter, regulatory efforts are still in their infancy.

It was only by mid July 2018 that the World Health Organisation in joint with the International Telecommunication Union would formally launch efforts into developing a benchmarking process for health AI models. On June 15 this year, well within the recent outbreak, 11 entities including the EU, US, UK, Japan, France and Germany finally came together to launch the Global Partnership on Artificial Intelligence.

This initiative accompanies the heightened and embroiled tensions between the tech spheres of various countries, such as the increased pressures on “The Big 4” (Google, Amazon, Apple and Facebook), the banning of Huawei devices or the war on TikTok. But more importantly, the recent pandemic has highlighted various issues underpinning data privacy laws.

The EU’s General Data Protection Regulation has proved itself as a veritable barrier in the adoption of methods to flatten the curve, notably the restrictive use of users’ GPS data. This is contrasted to the liberties in, for example, South Korea which is sometimes critiqued for its intensified efforts in using GPS, credit card history, CCTV footage and SMS data in tracking the developments of COVID-19.

Efforts to develop a pan-european Coronavirus App quickly fizzled once the reality of differing attitudes to data and privacy dawned on the various member states. Now, more than ever we are at a crossroad in the health industry. Whilst we cannot dismiss the value of measures such as the GDPR, the undeniable value of AI-based methodology, especially during such times, requires us to once again rethink how we approach data. It is undeniable that AI will continue to increase its presence and use in our life, though the next few steps will be crucial in determining Artificial Intelligence’s path.

How I Write My Paper Cheaply

Strategies For Writing Papers for College

This website uses cookies to improve your experience while you navigate through the website. Out of these, the cookies that are categorized as necessary are stored on your browser as they are essential for the working of basic functionalities of the website. We also use third-party cookies that help us analyze and understand how you use this website. These cookies will be stored in your browser only with your consent. You also have the option to opt-out of these cookies. But opting out of some of these cookies may affect your browsing experience.
Necessary Always Enabled
Necessary cookies are absolutely essential for the website to function properly. These cookies ensure basic functionalities and security features of the website, anonymously.
Functional
Functional cookies help to perform certain functionalities like sharing the content of the website on social media platforms, collect feedbacks, and other third-party features.
Performance
Performance cookies are used to understand and analyze the key performance indexes of the website which helps in delivering a better user experience for the visitors.
Analytics
Analytical cookies are used to understand how visitors interact with the website. These cookies help provide information on metrics the number of visitors, bounce rate, traffic source, etc.
Advertisement
Advertisement cookies are used to provide visitors with relevant ads and marketing campaigns. These cookies track visitors across websites and collect information to provide customized ads.
Others
Other uncategorized cookies are those that are being analyzed and have not been classified into a category as yet.
Save & Accept